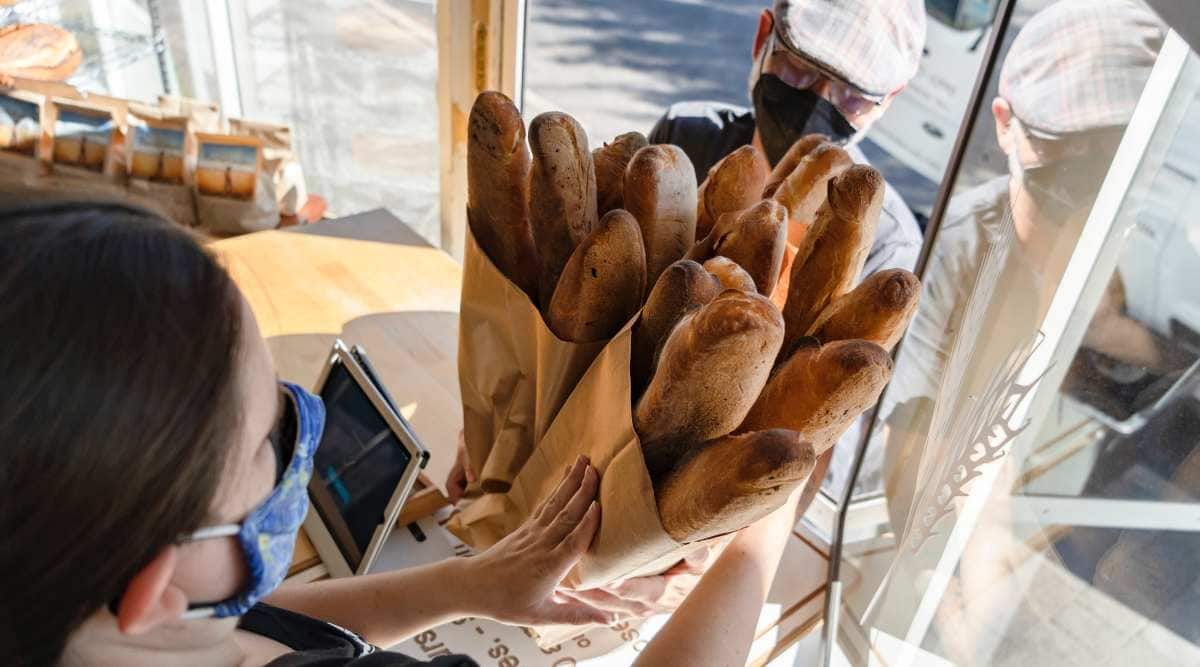 A baker’s quest to make bread that blurs borders

The July sun had barely risen, but the heat was already far above comfort. Don Guerra seemed unfazed, however, as if the desert had long since settled into his bones. It had been moving swiftly since 4 a.m. to the soundtrack of a built-in charger, the rigid canvas conveyor belt that sends raw torpedoes of sourdough to the decks of its four-tier oven at Barrio Bread.

Guerra, 51, shook thick flour across the surface of a purplish-gray dough before reaching for a plastic stencil: an image of wheat spears floating in front of a saguaro cactus. “One of my absolute favorites,” he said of the bread, which he calls Locavore. When finished, it gives off a lush malt odor and a strong sour smell. It contains three types of wheat (all grown in southern Arizona), including White Sonora, which Guerra helped revive.

The return to service of this heritage variety was intentional. Because although Guerra still uses the vocabulary and traditions of French and Italian bakery, he has achieved something radical. Cooking exclusively with grains grown in southern Arizona, Guerra traced wheat back to its deepest roots in North America: the part of the Sonoran Desert that includes Tucson and plunges below the US-Mexico border to ‘to the fields where Spanish missionaries are said to have introduced grain in the mid-1600s.

Plus, in a cottage industry that is extremely white and in a nation where the iconography of wheat seems etched into the amber waves of the Great Plains, Guerra – gently and with a smile – challenges the culture.

Blacks, natives and other people of color are often marginalized in the baking community, Guerra said, but for him baking is an integral part of his identity.

“Bread is ultimately who I am,” he said.

His efforts have become an inspiration to other bakers. At Gusto Bread in Long Beach, Calif., Arturo Enciso favors Spanish terms for baking. He calls his sourdough starter masa madre, or mother dough, and his huesos, or bone baguettes. Enciso, whose parents are from Mexico, started out in what he calls a classic fashion, baking the sourdough bread he gleaned in the French tradition. Now he’s overhauling artisan bakery in a way that centers a Latino identity. Enciso’s California bread, made from grain grown in the state, was directly inspired by Barrio’s Heritage bread.

“Make the product more meaningful and come up with a baking philosophy – Don was one of the first guys I saw doing this,” Enciso said.

Bryan Ford is the author of “New World Sourdough,” a cookbook published last year that examines artisan baking through the lens of Latin America. Ford, whose heritage is Afro-Honduran, said he saw in these slides the beginnings of a movement.

“Whether it’s someone like Don,” he said, “tending to the grain and tapping into the grain crop to explore this idea, it’s nice to see more bakers with these roots, than ‘they are Mexican, Central American or South American ”. It is important that these artisans come back to “using grain in a way that highlights our culture,” he added.

In Tucson, a city better known for its flour tortillas than sourdough, Guerra is a star of the local grain movement. Many artisan bakers talk about growing local grain economies, using grain harvested and ground a relatively short distance from their ovens – the locavore ethic applied to baking. Guerra has been doing this for years, working with southern Arizona grain farmers, the San Xavier Native Co-op Farm and other groups.

One of his first obsessions was White Sonora wheat. According to the nonprofit Slow Food USA, the grain was first planted by the Opata people in an area less than 80 km from Magdalena de Kino, the city of Sonora, Mexico, where Guerra traces the roots. Latino and yaqui tribals of his family. . (“It’s a throwback,” he said. “It’s real.”) While White Sonora was the dominant variety in the western United States for much of the 19th century , she was commercially dead in the 1980s.

In 2014, Guerra joined a campaign to revive grain led by Native Seeds / Search, a Tucson seed bank whose offerings are collected in the Southwest region. Guerra helped persuade Arizona growers like BKW Farms to give him a chance by promising to buy part of the crop for Barrio Bread.

“These were people going to the Sonora area,” he said, “and talking to these little farmers in these valleys, baking tortillas and saying, ‘Hey, can I have some Mason jars full of seeds? ‘ “

Guerra was born in 1970 in Tempe, just east of Phoenix. Her father, Bennie, was a barber; her mother, Denise, who has Irish roots, worked at home. “There wasn’t a lot of money,” Guerra said. “But there was flour.” Her mother made bread, cookies, pies. His paternal grandmother had a special touch in making flour tortillas.

Guerra’s parents encouraged assimilation. His father would recall a white-only public swimming pool in Tempe in the 1960s, with signs prohibiting Mexican Americans. “For me growing up it was like, ‘Don’t speak Spanish in the community because people will know you’re Mexican,’” Guerra said. He calls her embrace of her heritage particularly liberating because of this story of caution.

At age 8, Guerra started a shoe shine business in her father’s barbershop; at 16, he says, he ran a restaurant. A few years later – he can’t remember how many – Guerra discovered bread. “I had so much work behind me,” he recalls, “I just needed this product that I was totally passionate about. All of a sudden it was like bread and baking – it’s my jam now. “

He learned basic skills at Arizona Bread Co. in North Scottsdale and learned to write a business plan as part of a community college program.

In 1996, Guerra opened his first bakery, Village Baker, in Flagstaff, Arizona. He opened a second branch in Ashland, Oregon a few years later. The bread and pastry menus were enormous; Guerra felt perpetually exhausted. He sold the business and moved to Tucson in 2000 with his wife, Jen. Thinking he would pursue a more stable career, he enrolled at the University of Arizona, where he obtained a teaching degree.

After seven years of teaching mathematics and sports training in a public elementary school, Guerra has recovered. In 2009, he transformed his two-car garage into a production kitchen. His former colleagues were among his first clients; he sold bread to teachers, peddled loaves on Shopify, and generated lines at farmers’ markets. He called his business a CSB (Community Supported Bakery), adopting its name from Barrio Del Este, the Tucson neighborhood where his garage quickly began to glow and buzz long before sunrise.

“Sometimes I’m like ‘Wow, I spawned this thing in my garage,’” Guerra said with a laugh. “Look how many interesting things came out of the garages: Steve Jobs, the Ramones. In other places – for example in Mexico – man you’re a legend if you can outfit your house and have a little storefront on the side. This person is truly respected.

In 2016, after eight years in the garage, Guerra opened its current location in a small 1960s mall. The staging area is almost exactly the same size as its old garage; the dimensions make him feel the most like himself, he said.

Guerra and his wife separated three years ago, in part because of disagreements over her early hours and a grueling workload. (She still co-owns Barrio Bread and manages its human resources and finances.) This year Guerra oversaw the opening of Barrio Charro, a daytime spot in Tucson that serves sandwiches and baked goods, a collaboration with the Si Charro! catering group. And he launched Barrio Grains, a packaged line of whole grains and flour blends that go into Barrio breads, produced by Hayden Flour Mills of Queen Creek, Ariz.

Guerra also has a new obsession. He’s looking to secure a 50-pound bag of organic heirloom wheat north of the border in Nogales, Arizona. He contacted small-scale farmers in Sonora, including Jose Luis Lámbarri, a farmer near Ciudad Obregón, 400 miles south of Tucson. Lámbarri cultivates Yaqui-50, a soft wheat known for its sweet and nutty taste.

Despite countless bureaucratic hurdles, Guerra seemed full of energy, hopeful of getting his hands on it, grinding it in his table mill, mixing it into his pasta.

“Cross the borders, give this grain to my people in the form of bread,” he said. “For me, it’s power.”

This article originally appeared in The New York Times.