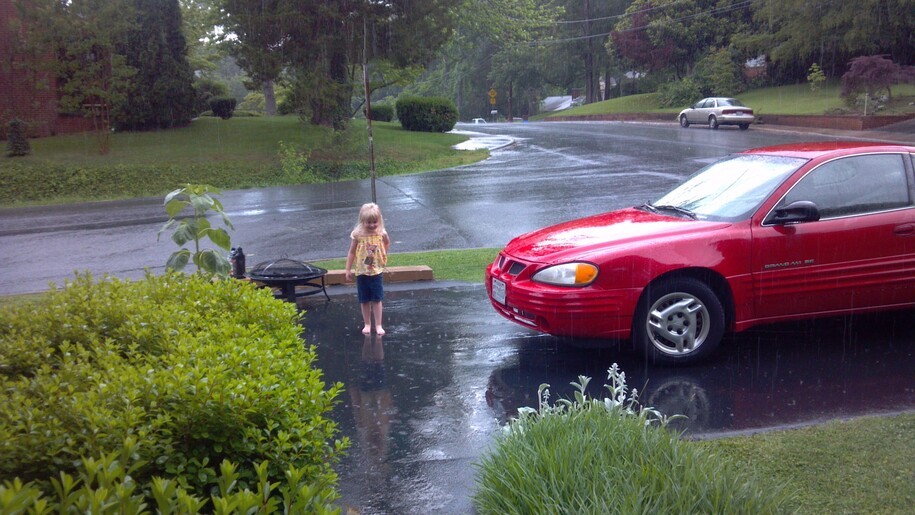 An ode to my daughter for Father’s Day.

One of the lowest times of my life was in the fall of 2008. I had just moved my granddaughter and I hundreds of miles from home and the rest of our family to attend the University of Virginia. . I had recognized that the opportunity to be admitted to UVA was – but I also knew that it was a possibility that I could barely afford. I could barely afford to work full time, attend Virginia Western Community College, and juggle a baby — let alone move across the state and attend a college where the tuition alone was more higher than what I paid in a year at community college.

But I decided to take a chance on forging a better life for my daughter and me.

And then the economy collapsed.

The part-time job I had found almost dried up. I had to pay $5,000 cash for health insurance for my daughter and I, or be expelled from school. My babysitter collapsed after being prepaid, and I had to find another one. And the outlook was that things were going to get MUCH worse.

It was a Thursday afternoon. I had filled up my 1999 Pontiac Grand Am the week before—put in $40 of gas at a then crazy price of $3.45 a gallon—and had been hypermiling and coasting to earn things until on pay day. But even so, the “Low Gas” light had been on for a whole day or more, and I still had to pick up my daughter from the new babysitter, pick up my check at work (which we were allowed to do after closing Thursday afternoon) and go home.

I knew my little four-cylinder wasn’t going to take much more. So after picking up my daughter and strapping her into her carrier, I drove to the nearest gas station – where the sign outside said $3.99 a gallon – pulled over parking space and I began to feel a grip of panic grip my chest.

Because I had no money. My credit card was maxed out with tuition and books that my student loans didn’t cover, I had no debit card, no cash; nothing. And so I did the only thing I could think of – I searched my car for whatever money I might have. The glove box. Under the seats. The console table. The floors. Chest. Every nook and cranny there was.

After scrubbing the car several times I got a total of $0.53. A quarter, two cents and eight cents, most of which were slightly sticky as they had been in the bottom of the cup holder for god knows how long. So I pulled my Pontiac to pump #3, got my daughter’s carrier (who is a deep sleeper) out the back, and walked into the gas station to prepay.

Until the day I die, I will never forget the face the cashier made when I offered my $0.53 for gas. The “Eww, rude,” they muttered loud enough for everyone to hear. The look of total disdain, as if to say “Is that it? Really ? in front of my daughter – even though she was only nine months old, forcing her to be there to witness my complete and utter humiliation was right…and really, I’m glossing over it here, because seeing even almost a decade and a half later, it still hurts.

I walked out of the gas station with my daughter’s carrier under my arm, begging me not to cry.

As I secured her carrier in the back seat, my daughter looked at me – now awake and with bright eyes – and cooed happily…

…and at that moment, the tears that were welling up in the corner of my eyes dried up. My mood and behavior immediately changed. My life changed in that exact moment because I knew that even though things were going badly, I had someone who would be unequivocally by my side as I fought to make things better.

I am blessed to be the father of three amazing children and I love them all more than I can ever tell anyone. But I was blessed with a much more stable position in my life when my two boys were born. It hasn’t all been easy – the last two years of COVID, the political operatives who preyed on my children, the challenges our country and our democracy have faced, becoming a Pride family in an increasingly more openly and dangerously hostile to it – but there were never again the lowlands of bare pantries, formulaic stretches and empty gas tanks like there were back then.

And my daughter has been there everything with me.

Being a dad is the best thing I’ve ever been or will ever be.

Thanks to my kids for making me one. Thank you to my dad, to the dads around the world, to the moms who play both roles, to everyone who makes the magic happen for their children.

Kellen Squire is an emergency department nurse from Barboursville, Va., and a candidate for the Virginia House of Delegates.

Locally and ethically made fashion shouldn’t be expensive. Here’s where you can find it – Manila Bulletin