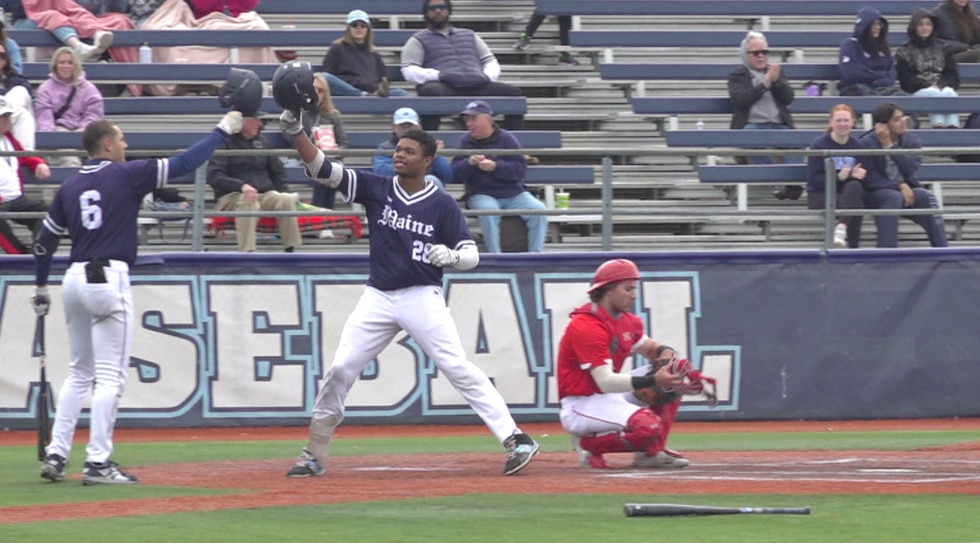 ORONO, Maine (WABI) – Is there a hotter college baseball team than the UMaine Black Bears?

Going into Sunday’s game, the Orono club were riding a twelve-game winning streak, including a 15-2 victory in Saturday’s game.

Skipper Nick Derba had Brett Erwin on the mound for Maine looking to get the series sweep and he was dealing.

Thanks to 6 and a third, he had seven strikeouts while allowing three runs.

Behind him were soaring bats of the Black Bears.

At the end of the 5th, Jeremiah Jenkins went up to the plate and this ball could have landed on Caribou! His 7th home run of the year brings the score to 4-1.

The 6th was big for the Black Bears with three extra runs, one on wild pitch, making it 7-1.

Hartford would not go quietly, however. High drama came to the diamond in the final innings.

A few errors on Orono’s defense as well as two outbursts from Daniel Burnett tied the game at eight.

With two men down in the 8th, Jake Marquez chose left field to enter the lead race.

In the top 9, Hartford threatened with two on and two out and reliever Jordan Shulefand got the strikeout for the win.

The Black Bears win their 13th straight in thrilling fashion.

“Yeah, that was a really special race, you know? I was telling the guys before the game that it’s rare, it doesn’t happen too often. And it’s really exciting to be a part of something like that. I’m really excited to see how far we’re going,” said winning pitcher Jordan Shulefand, who is now 5-1 this year.

The Black Bears will be looking to make 14 in a row when they take on the University of Massachusetts Lowell on May 6.