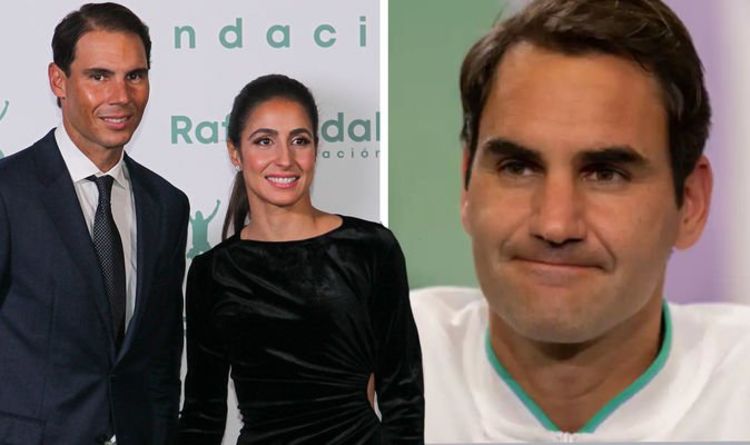 Tennis legend Rafael Nadal, 35, married his longtime girlfriend since 2005 Xisca Perello, 31, on Saturday in a star-studded ceremony at a castle in Mallorca. And while Juan Carlos I, the King of Spain from 1975 to 2014, was spotted arriving in La Fortaleza to attend the wedding among other famous faces, fierce competitor and close friend of Nadal, Roger Federer, has revealed that he had not received an invitation.

But don’t worry, the eight-time Wimbledon winner admitted he wasn’t expecting it, despite the two being good friends.

“I wasn’t invited and I didn’t expect it,” Federer said on Sunday.

“It’s not a problem at all! I congratulated him on his wedding day and I didn’t expect him to respond.

“I knew he had better things to do. Like celebrate in a big way,” he joked.

“I’m happy to see him and ask him how it went.”

Federer previously revealed that he would be busy preparing for the Swiss Indoors tournament in his hometown Basel during the wedding.

There were around 350 guests invited to the lavish ceremony, which included members close to Nadal’s team, his touring colleagues and celebrities from outside the sport.

Nadal is currently ranked No. 5 in the world by the Association of Tennis Professionals and has remained No. 1 for an impressive total of 209 weeks.

Speaking to Spanish media on Sunday, he shrugged: “I’m going to tell you one thing, and I say it with my hand on my heart.

“I understand this whole GOAT movie that was built around all of this. I live hand to mouth, and my day-to-day and my concerns are different from all of this about being the best in history.

“I’m honest, it’s not a show. In the end, we coincided as three players who obviously achieved special things in the history of our sport. No one had done them before.

“If anyone ends up earning more, then fantastic, really. Somehow, the three of us have far exceeded all of our expectations since we were young.”

He added: “We have all achieved our dream and we have exceeded it by far. And the reality is that I am very happy with everything that has happened so far.

“That doesn’t mean I don’t want to keep enjoying what I’m doing, but I don’t live with the inner angst or desperation of wanting to be the one with the most (the Grand Slams).

“If it comes, it comes. I don’t think my future happiness depends on me ending up winning a Grand Slam more than Novak or Roger.