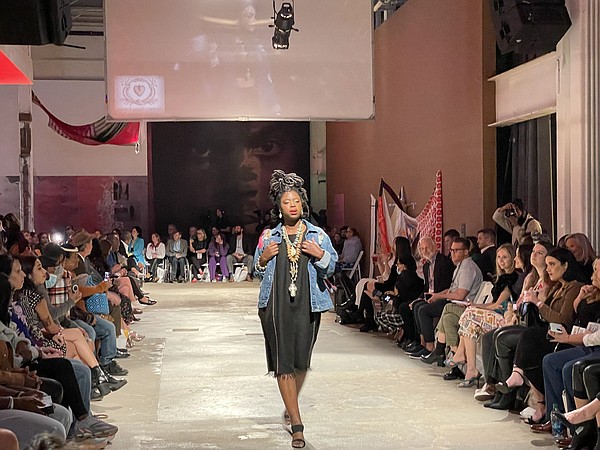 Sunshine Broder and Kyle Kellams, host of KUAF’s “Ozarks at Large,” were the hosts for the evening at The Momentary in Bentonville.

Many of the outfits, shows, and designers were direct products of funding and programs created by Interform, the nonprofit arts and culture organization that provides community education and plans all Fashion Week events.

Interform CEO Robin Atkinson told the crowd that the organization takes pride in uplifting the community and transforming Northwest Arkansas into an incredible fashionable region.

The fabrics for many of the shows were imported from Interform members’ families who are overseas, and the styles were a mix of traditional, modern and contemporary.

“We’re so proud to say we helped make them,” Atkinson said.

The crowd responded to the occasional playful moments on the runway and showed their support for all the models. After a few shows, fire alarms went off at the Momentary. All guests and staff were ushered outside for a short impromptu intermission before the scheduled one while firefighters carried out a quick inspection. Shortly after, everyone went inside for the rest of the evening.

But the excitement intensified for one show in particular – one featuring The Transition Closet, which spotlighted 13 transgender, intersex or non-binary models.

It’s the show that Atkinson said Interform collaborated on for months after realizing last year that they wanted to think differently, more broadly about working with the LGBTQ+ community, particularly the transgender community.

“As I knew we were planning to have it here (at Momentary), which has ‘You Belong Here’ on the front, I knew it could be a platform for exposure,” Atkinson said.

Making a gender transition is an extremely daunting task, in part because, Atkinson said, a wardrobe reflects something about who you are. Replacing everything, all your clothes, is a monumental undertaking.

Joel Manning, chairman of the board of Trans Equality Network, who is transgender and non-binary himself, told the audience that he wanted to talk about the importance of fashion in a transitioning experience. Manning pointed out that many transgender people struggle with trying to “pass” for the gender that reflects who they are, but many people are against them in this effort. This is how clothes can become a matter of survival.

What the audience was about to see during Transition Closet’s catwalk appearance, Manning said, was a lot of transgender people living their best lives.

The transgender, intersex and non-binary models paraded to “Journey Home,” an original song by local transgender musician Skylar Conover that describes what it’s like to be transgender.

Manning said he hopes for a future where you don’t have to go to a fashion show to see transgender people comfortable in their own skin.

As the models returned for their finale, the group march, they held up pride flags as the audience gave a standing ovation and some wiped away tears.

The scheduling of today’s events has been affected by the weather. Tonight’s showcase could be postponed to Sunday, organizers say.

WHERE — The momentary in Bentonville

Bonus: There will be a panel discussion on “The Rise of Regional Fashion” at 2 p.m. Saturday at the Tower Bar at Momentary. Free entry.