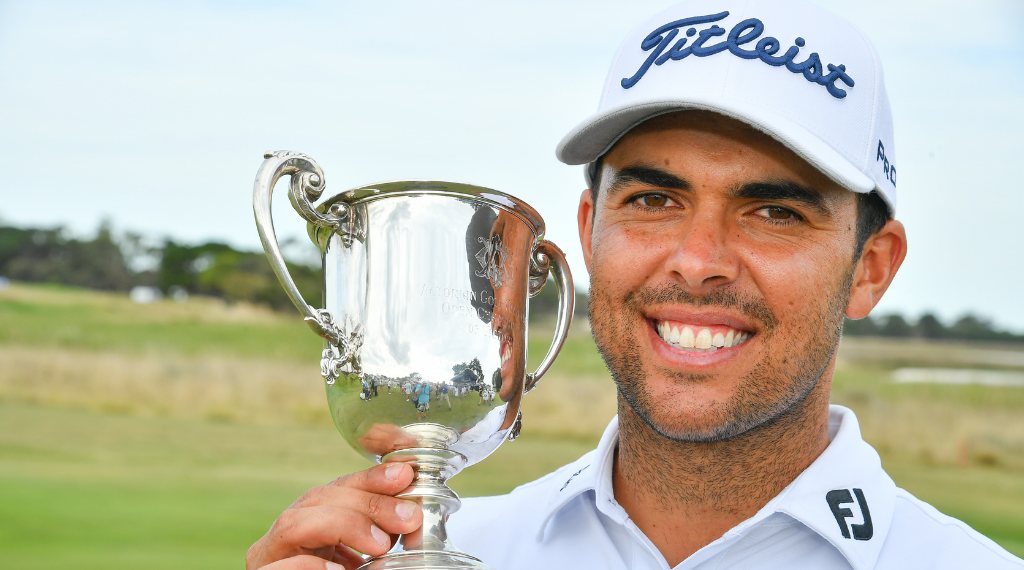 Papadatos, 30, produced a perfect six-under round on Sunday of 66 to finish a shot ahead of playing partner Ben Campbell at 20 under for the tournament and not only clinch his fifth professional victory, but also a place on the court at St Andrews for the 150th Open this year.

Fans at 13th Beach were treated to an exquisite display of golf from Papadatos and New Zealand’s Campbell as they both cleared bogey and continually pressured themselves.

It was most prevalent on the dramatic final hole when Campbell’s shot from the greenside bunker rolled in about three feet at all but guaranteed a birdie and threw the gauntlet at Papadatos he would need to birdie for ensure victory.

The champion had been as cold as ice in the scorching summer sun all day and the 18th was no exception when he came five feet off the green and quickly sank the all-important birdie putt.

“I just thought why not another one. I did a couple of them today, so I felt pretty comfortable on them, surprisingly,” Papadatos said.

“It was a bit of a nightmare putt. Left to right, downhill with the left wind but he went straight in.

This putt earned its first win since 2018 when it triumphed on the Challenge Tour at the Portuguese Open and in the years since Papadatos has faced challenges with swing adjustments, life management on tour and the mental impact of the game.

“It shows that I was unlucky the first time around. I’m so happy to get my game back and play well again.

“Winning in the final group – I’ve done it once at the New Zealand Open – it’s definitely a different feeling. There’s a lot more pressure, expectation, the crowds are there. You know exactly what you have to do, so I’m going to get a lot out of it.

Papadatos has also come to terms with his own strengths and weaknesses lately. He admits he has problems with his ball-striking, but he has a sensational short game that he showcased today.

“I always struggle to hit the ball so I started to accept that a bit more and when I hit a bad shot I don’t blame myself.”

As for heading to St Andrews in July, Papadatos will arrive there with experience of both the venue itself and the tournament.

“I played at Royal Portrush when I came second at the Australian Open in 2019 and it was pretty cool. So I know what it’s all about now,” he said.

“I’ve played the Dunhill Links about four times. I didn’t have much luck there. I struggle in the cold and the wind so I have a bit of work to do. But I just can’t wait to be there. It’s going to be awesome.

He will be joined by Campbell, who will be making his major debut, and Matthew Griffin, who competed at the 2017 Open and earned the last spot offered this year by finishing third at 16 under par.