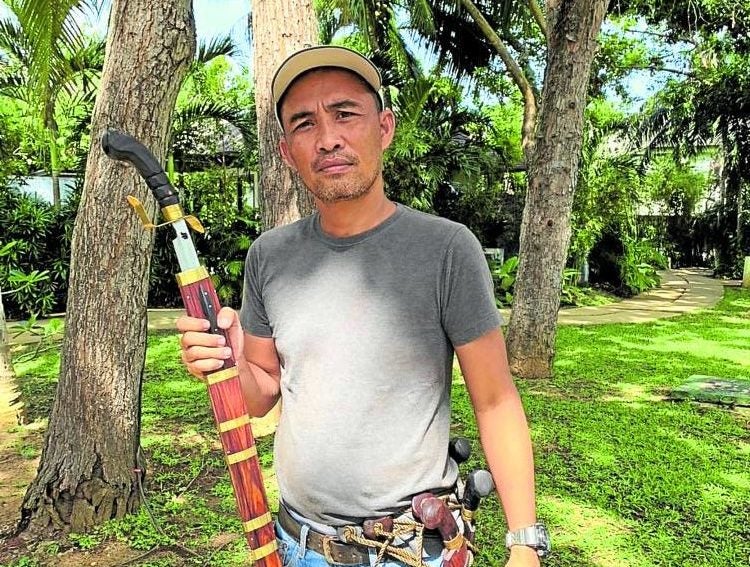 The beautiful blades of Bohol

It was jealousy that drove Cid Titus Cempron to launch his brand of knives.

A professor of philosophy at Bohol University, the 49-year-old became envious when he saw several of his friends driving four-wheelers, while he was stuck with a motorbike. “It pushed me. May mga negosyo kasi sila, kahit maliit lang. They told me na mag-sideline ako,” he said.

He started thinking about possible sources of additional income. For a while he sold pillows. In the end, he didn’t have to look far because the opportunity presented itself during an event. “Mayor’s birthday. Mapurol ‘yung knife na panghiwa in lechon. Sabi ko, ‘Mayor, can knife ako na para riyan.’ He pulled out a bolo and easily hacked the Roast Pig Hell.

This bolo had been customized for him by a third generation blacksmith from Sikatuna, Bohol. The mayor was impressed. “Nakita niya how it was so nagpagawa rin siya. It started like this.

Its installation is quite simple. Cempron coordinates with the customer and provides the materials and design, while the blacksmith he has partnered with makes the knives to his specifications. He is the one who works directly with panday because, according to experience, sometimes vital information is lost in translation, especially when dealing with foreign clients. Also, some blacksmiths are stuck in their old ways.

Cempron’s Bohol Blades, which he launched and registered with the Ministry of Trade and Industry in 2018, is highly responsive, up-to-date and collaborative. From eight initial blades, his brand now has 27.

Cid did his homework and researched the shape of his blades. He says he is deeply rooted in the local culture and way of life, the same way the Ifugao and Panay people have their own signature forms depending on their way of life.

Based on his analysis, he finds the design of the Visayan blades to be very ergonomic. “We are farmers, and people who grew up in rural areas know what an itak is. It fits firmly in the hand.

His recent works are more Japanese in design and for this he studied the architecture and composition of their knives online.

With Facebook as a marketing tool, he caught the attention of other knife lovers overseas and in 2019 he started exporting, first to the USA, then to Germany, UK, in the Czech Republic, Switzerland, Spain, Canada, Australia and Singapore. The request startled him and overwhelmed him.

As of this writing, he has three months of commissioned work yet to be done.

Among its popular pieces is the Pinalingkod knife with a 10-inch carbon steel blade. It’s a utilitarian bolo but since it has a belly, he thought of shortening it to make it suitable for practical use in the kitchen. The handle is made of rare albino carabao horn and the sheath is made of balayong hardwood. The ferrule is bronze and the pins are brass so they won’t rust easily.

There is also a slimmer version, used for slaughtering hogs and carabaos.

One of his most recent works is the Japanese-inspired Bunka Knife with an 8.5 inch blade made with the same handle and sheath as the Pinalingkod. It is a general purpose kitchen knife, much like the common Santoku. The triangle-shaped tip is particularly useful for slicing fish or meat.

In 2019, Cid was finally able to buy a Hilux, much better than a multicab. He hopes for greater things now that he has his Bohol Blades stable and running. “I want to create a blacksmithing academy because it’s a dying art. It’s not even in the Tesda (Technical Education And Skills Development Authority) curriculum. I want it to be certified because I don’t want this job to die. It is essential in agriculture.

Was it the worst night in fashion history at the Oscars? – KION546