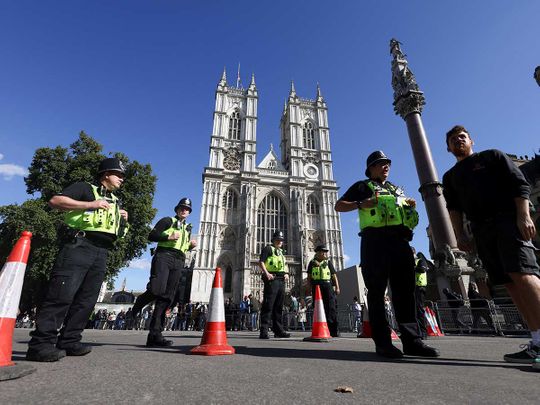 London: Westminster Abbey, the site of Queen Elizabeth II’s funeral, has been central to the British Royal Family for almost a millennium.

In the 1040s, King Edward the Confessor built a stone church on the site of a Benedictine monastery founded around 960, during a major expansion.

Construction of today’s imposing Gothic abbey began under the orders of King Henry III in 1245.

It was designed as a coronation and burial place for monarchs.

William I was the first king crowned in the abbey in 1066 – a tradition that has endured through the centuries.

In 1953, Elizabeth II was crowned in the coronation chair, as would her eldest son Charles.

The chair was made in 1300-1301. It housed the Stone of Scone, which was used for centuries to crown Scottish kings.

The stone was temporarily stolen in a daring raid by Scottish students in 1950, who accidentally broke it in half.

In 1996, with the rise of nationalist sentiment, he was symbolically sent back to Scotland but would return from Edinburgh Castle to Westminster for the coronations.

The abbey has hosted 38 coronation ceremonies for reigning monarchs.

The church has also been the scene of royal weddings – most since World War I. The first was when King Henry I married Princess Matilda of Scotland on November 11, 1100.

And Queen Elizabeth married Philip Mountbatten in the abbey in 1947, bringing royal color to the recovery years after World War II.

Queen Elizabeth’s sister, Princess Margaret, and her children, Princess Anne and Prince Andrew, were all married at the Abbey.

The last royal wedding was that of Charles’ eldest son, Prince William, who married his college sweetheart Kate Middleton in 2011.

Only 14 years earlier, in 1997, William had attended the funeral of his mother Diana at the Abbey after her death in a car accident in Paris.

Some 18 British monarchs are believed to be buried in the abbey, among 30 kings and queens, starting with Edward the Confessor. King George II was the last, in 1760.

Around 3,330 people are buried at the abbey, including some of the great figures in British history.

Astrophysics giant Stephen Hawking’s ashes were buried in 2018 between the graves of Isaac Newton and Charles Darwin.

There is a memorial stone to wartime prime minister Winston Churchill inside the west entrance.

It stands near the Tomb of the Unknown Warrior, whose body was brought from mainland Europe after World War I. The grave represents all the fallen British troops.

Queen Elizabeth and her mother before her left their wedding bouquets at the grave.

The abbey – or to give it its full name, St Peter’s Collegiate Church, Westminster – is a ‘royal private’, meaning that it is exempt from any ecclesiastical jurisdiction other than that of the monarch.

The British sovereign is the supreme governor of the Church of England.

The abbey can regularly hold around 2,200 people, although most cannot attend Queen Elizabeth’s funeral due to the screen separating the nave from the chancel.

The royal family will be seated closest to the coffin.

About 8,250 people rushed to the coronation of Queen Elizabeth, in specially erected stands.

The church in central London played a major role in the life of Queen Elizabeth: in addition to her marriage, she organized the funeral of her mother and the celebrations of the main events of her record reign.

The monarch left her mark on the abbey.

Queen Elizabeth’s record reign is celebrated in a stained glass window unveiled in September 2018. Designed by David Hockney, it depicts the Yorkshire countryside in spring.

The Sovereign opened the Queen’s Diamond Jubilee Galleries in June 2018. Some 16 meters (52 feet) above the Abbey floor, they display treasures and tell the story of the church.

The abbey is still a working church and holds regular services open to the public.